Twitter announced financial results for the fourth quarter of 2016 and the year as a whole.

In the reporting quarter, revenues Twitter grew by 1% year-on-year to $717 million In the same period of 2015 revenue growth of 48%. The company's revenues from advertising declined slightly to $638 million. Net loss amounted to a record $167,1 million – 85% more than the year before.

The monthly audience of the social network in the reporting quarter increased by 2 million to 319 million people. In annual terms, the growth amounted to 4%.

The last three months of 2016 was difficult for the company. To find a buyer and failed, so Twitter was forced to fight for profitability.

In the fourth quarter, the company cut 9% of its staff. However, management measures have not helped to reduce costs. In this period from Twitter has also gone operational and technical directors, which led to increased pressure to CEO Jack Dorsey. However, the microblogging service continues to fight for their future.

"Although we may not meet expectations for growth, there is one aspect in which we continue to grow and stay ahead of our competitors is the role and influence of Twitter. That is why we are all here fighting for the service and the company that we love. It was hard for us, and will be, but it's worth it," said Dorsey during a conference call for analysts.

After the publication of the financial report, Twitter's stock fell 10% to $of 16.79 per share. 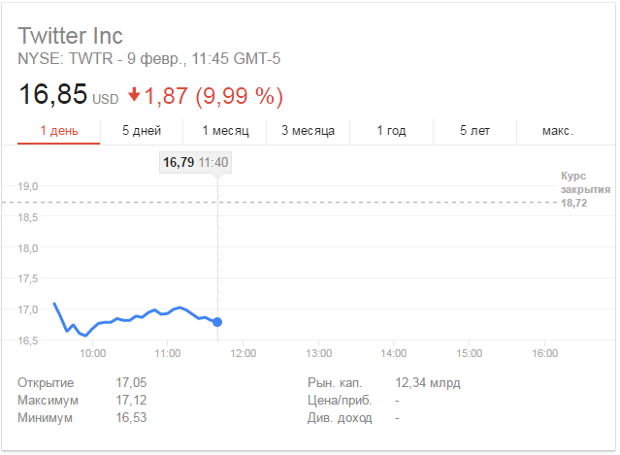 91744
Site views
Most popular in
Social