24% of Internet users in the world use social networks to present yourself, life, children and friends. Among Russians the figure is even higher — 39%. This is evidenced by the results of a research conducted by Kaspersky Lab. The research showed that for achieving the goal (the desired number of likes or comments) some users willing to take the actions, as controversial from the point of view and ethics, (especially men).

Men are less likely to think about their own privacy: nearly 5% of Russians confessed that they are ready to publish your photo in the nude, if it guarantees them a certain amount of likes. Among Russian women the proportion is slightly more than 1%. To post a photo of yourself in revealing clothes ready 8% of men and 4% women. 11% of Russians for the sake of likes can lie about its location and time, and among men 16%. 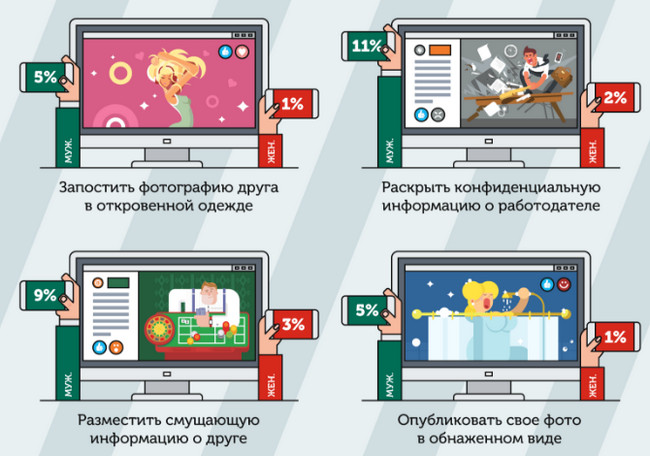 But in the pursuit of likes, users are willing to violate not only the rules of information security, but ethical norms by publishing information compromising friends. More than 5% of men admitted that they can post pictures of loved ones in revealing clothes (for women the figure is slightly above 1%). Men more often than women, ready to revealing secret or embarrassing information about their environment: to friends that can do 9% of the interviewed representatives of the men (women — 3%), the to colleagues — 10% men and 4% women, to employer — 11% and 2%. In addition, 12% of men admitted that they see nothing wrong to publish photos of drunk friends. Among women agreed with them only 2%.

Support for loved ones is equally important for men and women: 22% of Russians admit that if a loved ones does not like and it does not comment their posts, they start to worry. Men are more sensitive to social approval. 14% of Russians said that they have a fear collect too little and likes to be unpopular among friends. For Russian women the figure is 7%.

Research How social networks affect our lives and mood was held among 16 750 Internet users from 18 countries at the end of 2016. In the Russian sample included 1000 people.

93562
Site views
Most popular in
Social