Users of Runet began poluchatsya from Google that the company will include the value added tax (VAT) in accounts payable. About this report "Vedomosti", with reference to one of these letters, which refers to the inclusion of VAT in the account for the service usage file storage Google Drive.

Google has notified users of the service Google Drive with a paid subscription for inclusion in the cost of using the service of value added tax (18%) next year. The reason for this step was the so-called "tax on Google": 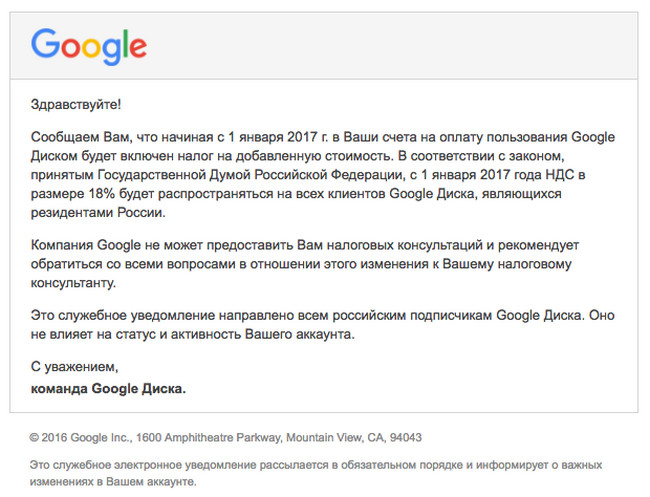 We will remind, the law on introduction of VAT on sales of digital services, so-called "tax on Google", was signed by the Russian President on 4 July 2016. From 1 January 2017, the law will affect organisations that do not have separate divisions in Russia and oblige them to register with the tax authority and regularly provide a Declaration on the value added tax (VAT). Russian organizations are already paying such a tax, therefore, the bill places them at par with foreign players.

The Federal tax service (FNS) has developed the portal "VAT office Internet companies", which foreign IT-companies will be able to pay a "tax on Google" remotely.

91744
Site views
Google
Sergey Ludkiewicz
20 April
URL parameters of the Google search engine results page
There is a possibility to adjust the results for the base query (which corresponds to the value of the parameter q or as_q ) using a number of get-parameters of the format variable=value used in the URL of the page of search results after the substring /search? . The use of these parameters can be very useful when parsing search results.
Read More
Most popular in
Google