Google announced about the integration of data visualization tools and Data Studio with Search Console.

To create reports Google Data Studio imports the data from:

Data Studio users can create reports that contain only the data from the Search Console, or combine data from different sources. For example, to compare trends in paid and organic traffic. 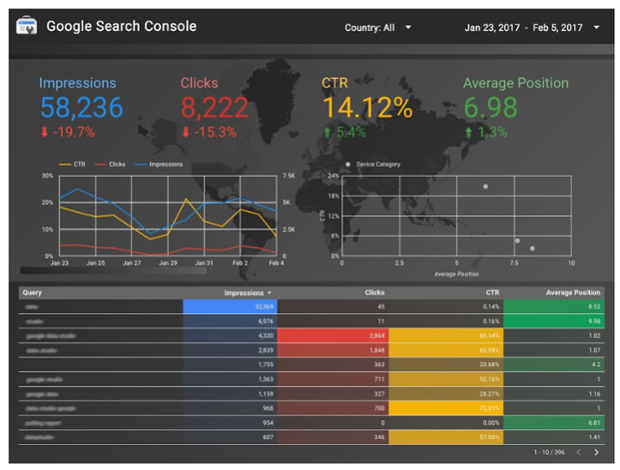 Data Studio is free version of Data Studio 360 tool. Previously, the service Data Studio was launched in the spring of 2016. Initially it was to create up to 5 reports, but at last week Google removed this restriction.

The paid version of the product Google Data Studio 360 is part of Google Analytics 360 Suite – set of tools for integrated working with data and marketing analytics.

93937
Site views
Google
Sergey Ludkiewicz
20 April
URL parameters of the Google search engine results page
There is a possibility to adjust the results for the base query (which corresponds to the value of the parameter q or as_q ) using a number of get-parameters of the format variable=value used in the URL of the page of search results after the substring /search? . The use of these parameters can be very useful when parsing search results.
Read More
Most popular in
Google
Most popular in
Search Marketing